Reflecting the nation’s growing appreciation for locally produced, high-quality food, more and more visitors are coming to Vermont to sample Vermont fare, whether it’s visiting artisanal cheesemaking facilities along the Vermont Cheese Trail, attending dozens of nationally-acclaimed food festivals, or enjoying a maple creemee at our ever-popular dairy bars. This, along with Vermont’s growing reputation as a center for agritourism, is bringing more and more dairy-related tourism dollars to our state.

The Vermont restaurant business accounted for more than $800 million in taxable sales in 2012. Dairy currently represents 11% of food dollars spent for in-home consumption. If milk, cheese, yogurt and ice cream play the same role in restaurant food preparation as in home food use, then some $100 million in restaurant activity can be attributed to dairy production.

Fodor’s Travel called the Vermont Cheesemakers Festival one of the “Top 10 Summer Food Festivals in the Nation.” Each year, more than 2,000 visitors from across the country descend on Shelburne Farms to enjoy the event, which has also been featured in the New York Times, The Boston Globe, and USA Today. [vtcheesefest.com]

The Ben & Jerry’s Ice Cream Factory is the #1 Tourist Destination in Vermont. The world-famous ice cream, which originated in Vermont, is sold in more than 30 countries across the globe. [benjerry.com]

Stop by Cabot’s visitor center where you can take a guided tour of the facility, view award-winning cheeses as they are being made, and sample a wide variety of Cabot cheeses, including the World’s Best Cheddar and Best Flavored Cheddar. [cabotcheese.coop/cabot-visitor-center-tours] 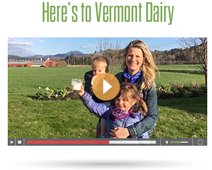